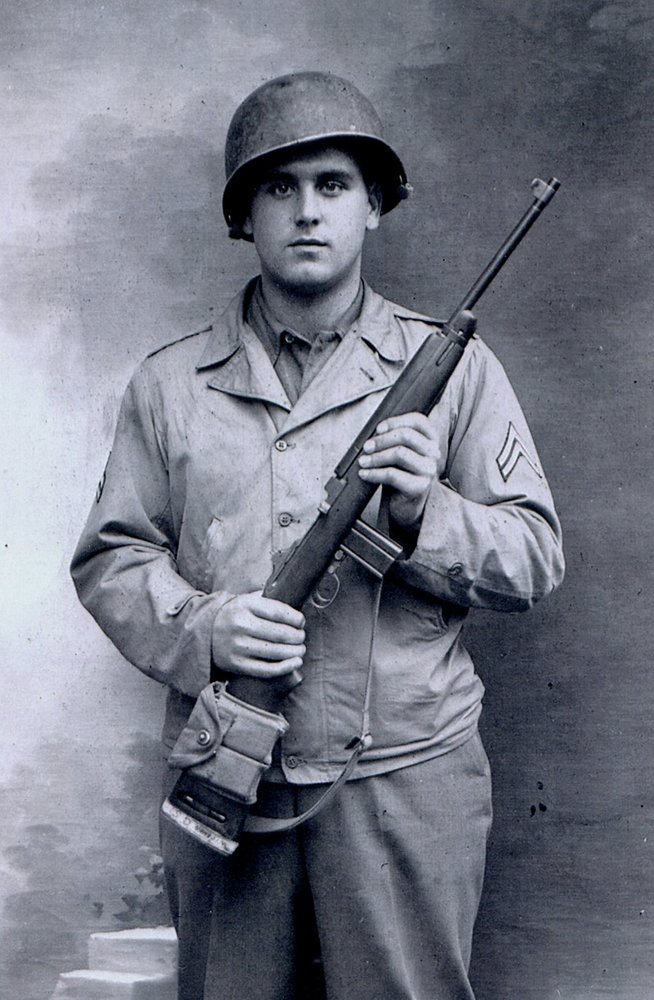 Gordon, born in Washington County, Virginia on 19 October, 1922, was one of a big family (ten kids) who farmed in parts of Washington and Smyth County for years, He loved his garden and was a very good cook.  He was always cooking some type of special pie to bring to family gatherings or to church. His deep faith was a large part of what made him the special person we all came to know and love.

He worked for the Brunswick Defense Plant in Marion , VA for many years and remained an active part of the ‘Brunswick Breakfast’ Group after his retirement.

A veteran of World War II, he was a Staff-Sgt in the 247th, General Patton’s Third Army.  He was part of the unit that kept the front lines supplied with ammunition. Proud to have served his country in WWII, he made it his goal to sing the National Anthem and Star Spangled Banner at every event he could in order to “help people learn about and remember all the sacrifices that are made by our military to help keep our great country free.” He was a Lifetime member of the VFW, Post 4667, and regularly attended their gatherings as long as his health allowed.  He made the trip with the Honor Flight that takes veterans to Washington, D.C. each year.  When he took the trip to the WWII Veterans Memorial in Bedford, VA, he sang the National Anthem for the group that made that trip possible.

Because of his efforts to strengthen American patriotism he was invited to sing at many venues, to list just a few, PBS’ Song of the Mountains; NHRA Nationals, at Bristol Thunder Valley Dragway; the Memorial Day observance at the Lincoln Theater in Marion, VA; Wytheville Community College’s Memorial Day Appreciation of Veterans service ; Bristol’s Ball Park where he had the honor of singing the National Anthem for the opening of the game on several occasions.  But his favorite journey was one we made every fall for quiet a few years, across the mountain to the elementary and middle schools in Rich Valley, VA.  They do a Veterans Day celebration and have a very nice program to honor the Vets. One young man there, Chaz Cassell, was such a dear friend to Gordon and always ate lunch with him and talked with him about his time in the military. Chaz’s respect for his service was such a neat thing to experience.  That always made it such a special day for Gordon, he loved helping the young people understand what a great county they live in.

Gordon touched many lives and will be dearly missed by all of us who knew and loved him.

And, if you want to hear Gordon sing, please check him out on YouTube.com.

Expressions of sympathy may be made to the family at www.seaverbrown.com. Seaver-Brown Funeral Service and Crematory is honored to serve the Widener Family.

To order memorial trees or send flowers to the family in memory of Gordon Stanley Widener, please visit our flower store.